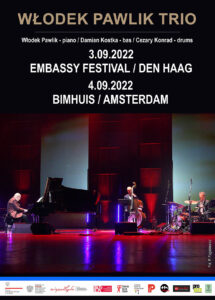 The Włodek Pawlik Trio is one of the most celebrated groups in Polish jazz. Pianist and composer Włodek Pawlik is strongly influenced by American jazz, but he also created variations on classical piano works by legendary Polish composers such as Frédéric Chopin en Ignacy Jan Paderewski. Jazz mixed with classical virtuosity and Slavic roots: this constitutes the essence of the Włodek Pawlik Trio.

At North Sea Jazz Festival, Włodek Pawlik has been announced as the ‘Horowitz of jazz’. He also celebrated success as a composer. He composed the music for Night In Calisia, the first Polish album to win a Grammy Award. This was recorded with his trio alongside trumpet legend Randy Brecker and the Kalisz Philharmonic Orchestra. Night In Calisia reached the highest ranks of the album chart in Poland.